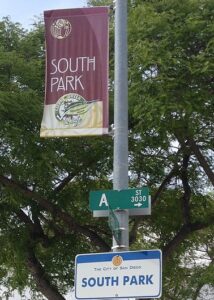 The South Park neighborhood of San Diego is directly adjacent to the southeast corner of Balboa Park, and it is very distinctive because of its tree-lined streets and its business district which can easily be traversed by pedestrians. It’s mostly a single-family residence region which includes quite a few small apartment buildings, and a number of bungalow courts as well. Within the community, you’ll find a number of different types of restaurants, grocery stores, cafés, wine bars, art galleries, taverns, and boutique shops.

It also has a residential treatment center for alcoholism called Pathfinders, and it’s home to the Albert Einstein Academy Charter School as well. The main thoroughfares through the community are 30th Street and Fern Street. According to Men’s Journal, 30th Street is home to the best craft beer breweries in the entire country, so beer lovers will be quite at home in South Park. It’s also a dog-friendly neighborhood which has one of the very few parks which have been designated as dog parks in the entire city of San Diego.

Given the fact that the area is very family-friendly and dog-friendly, it would stand to reason that South Park would be a great community to invest in. This is especially true if you’re looking for single-family dwellings as an investment opportunity, and as a premier real estate agency San Diego, CA, our own Sunset Realty Investments firm can help you find the best and most lucrative opportunities which are out there.

This area has enjoyed solid growth for quite a few years now, and it has been able to sustain that growth, which is great news for investors. As your property investment company San Diego, CA, Sunset Realty Investments is very much in tune with the local real estate market in South Park, and we’d be happy to share our knowledge and experience in representing you.

The appeal of South Park

Since it is an area predominantly featuring single-family residences, you might expect that there are a great many family-friendly activities available in the area, and that is definitely the case. Each year, the Old House Fair is staged at the corner of Beech Street and 30th Streets, and a number of vendors and area businesses ply their wares with items of home decor, with live music adding to the excitement, and a number of food vendors and arts and crafts specialists also offering their goods for sale.

Area retailers and restaurant owners have banded together to organize quarterly Walkabouts which promote becoming more familiar with some of the area businesses. Free trolleys are also arranged to transport people back and forth during the proceedings, so that everyone can join in on the fun. Another thing that area residents love about this community is its extremely low crime rate.

The South Park crime rate consistently ranks lower than the national average by far, which means that residents can feel very safe in being outside and enjoying the idyllic weather. This is of course, another factor which contributes to the family-friendly atmosphere that characterizes the entire community, and it’s another great reason to want to invest in the area.

South Park is a hip young neighborhood that was named based on its proximity to Balboa Park, which is located to the South of Balboa Park. Development of these areas started in 1905 and South Park is now considered one of the most historically significant neighborhoods in San Diego by income property investors. Local residents adore the area since nightlife including The Whistle Stop, Hamilton’s Tavern and the South Park Abbey are all within walking distance and the park is a short bike ride away.

Window shopping and perusing the small storefronts and family-owned businesses off Fern Street draws a crowd every weekend. Featuring local art, fashions and one-of-a-kind treasures, most of which you cannot find at any mall makes shopping in South Park an adventure. A noteworthy event named ‘The Quarterly Walkabout’ goes hand in hand with neighborhoods’ diversity and pride in the local arts, crafts, and culture. During Walkabout local retailers, shops and restaurants stay open late and offer discounted deals and tasty treats to passersby. South Park is now considered a very safe place to live and many young families take advantage of the plentiful number of parks and outdoor spaces.

On the smaller side, the 92102 zip code encompasses 4.6 sq. miles and borders the 5 Highway to the west and claims the land all the way to Euclid Ave to the east. Imperials Ave. is the boundary to the south. The northern boundaries of the zip code claim the southeast corner of Balboa Park and the canyon ridges it follows to the north can best be seen on a map. Estimated zip code population in 2016 was 45,420.  The 92102 zip code consists of neighborhoods South Park, Golden Hill, Grant Hill, Mount Hope, Hilltop, Chollas View, Chollas Creek, and Ridgeview Webster. Measured in 2018 there is a high percentage of rental units at 73%.

Year after Year San Diego has been proven to be an obvious choice for Real Estate Investors. Whether it’s your first investment, or you are interested in a 1031 Tax Deferred Exchange, we have the experience to to get it done. From “buy and hold” to “renovations and flips,” Andrew Grinnell and his team are highly experienced in helping investors like you.