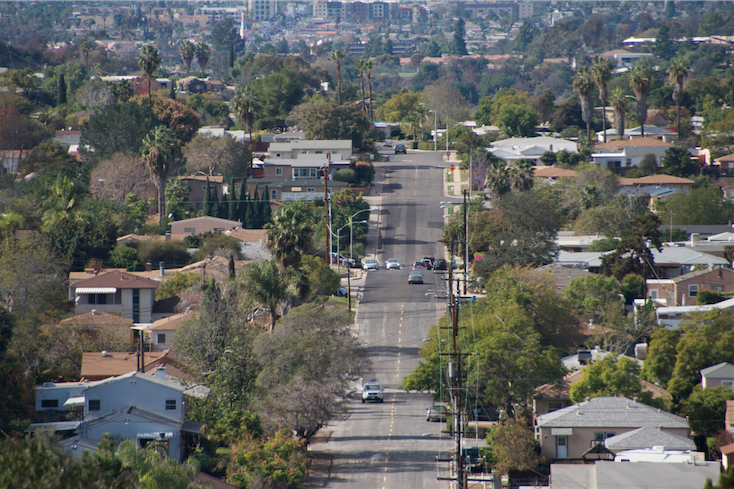 Rolando is a mid-city region of the greater San Diego area that is mostly residential, other than the lone commercial district on El Cajon Boulevard, where you’ll find the Campus Plaza shopping center. There are two main sections to the community, and they are divided by University Avenue into Rolando Village to the north and Rolando Park which is the southern area of the community.

Rolando Village is bordered by College Avenue to the west, University Avenue to the south, El Cajon Blvd. to the north, and the eastern border is somewhat irregular, being defined by several streets between 67th and 73rd streets. Rolando Park on the other hand, is bordered by College Avenue to the west, the 94 Freeway in the south, the city of La Mesa to the east, and University Avenue in the north. All throughout both communities, you’ll find a number of public walkways which are known to locals as ‘catwalks’, and these provide opportunity for joggers and pedestrians to navigate the neighborhood streets throughout the region.

As any good real estate buyer agent San Diego, CA can tell you, Rolando is a terrific community to invest in, primarily because it is almost exclusively residential. That means there are opportunities for single-family dwellings, multi-family dwellings, condominiums, and even apartment complexes which can provide a strong return on investment. Any real estate entrepreneur who is not acquainted with the area can quickly get up to speed by engaging the services of a real estate buyer San Diego, CA, such as the highly experienced and knowledgeable professionals found at our own Sunset Realty investments firm.

Rolando is one of those quiet, unspectacular neighborhoods, which is situated on the eastern side of the greater San Diego area, and which was primarily constructed during the postwar boom of the 1950’s. It features a number of bungalow-style houses and nostalgic architecture, the majority of which has been built throughout the very charming rolling hills of the area.

There are eight public sidewalks known as catwalks which connect a number of the tree-lined streets which serve the area, and these are great for taking your dog for a walk, or simply enjoying an evening stroll. There’s a great restaurant scene in the area which has a number of award-winning venues such as the Terra American Bistro, Bridges Bar & Grill, the Next Door Wine Bar, and Alforon’s Lebanese Cuisine.

Here you’ll also find a great many family-friendly activities which can be enjoyed at Clay Park, the Rolando Little League baseball diamonds, the Ray and Joan KROC Center, and Henry Clay Elementary School. During the 1920’s, the state of California was going through a period of very rapid growth, and it seemed that Rolando would be one of the areas which was focused on during this growth period.

However, the Great Depression squelched a great deal of that development initiative, and Rolando was forgotten about until after World War II, when construction interest revived. Since that time, much of the modern community was constructed, and a great deal of the existing commerce was developed in the area, so that Rolando could become the thriving community that it is today. At present, Rolando is a very family-friendly area where a great many opportunities exist for real estate investment, and where a great many families enjoy living, working, and playing.

Rolando is the eastern piece of the College area neighborhoods that stretches from the edge of the school to the 8 East freeway. Although it is not that big, the cost of living is affordable, especially for kids, so you will see most students living in the area. Because of the demand for student housing, income property is abundent. The Campus Plaza shopping Center is the closest mall that the students have to them at State besides Mission and Fashion Valley. Considering most students don’t have cars, this is always packed and a relatively safe area to live in with very little nightlife but a decent area to find restaurants to enjoy a meal.

Year after Year San Diego has been proven to be an obvious choice for Real Estate Investors. Whether it’s your first investment, or you are interested in a 1031 Tax Deferred Exchange, we have the experience to to get it done. From “buy and hold” to “renovations and flips,” Andrew Grinnell and his team are highly experienced in helping investors like you.